so is it Fat Monday?

A little more about Carnivale. It lasts over a week, so what else am I going to talk about? There were a few questions from my last post, so I'll elaborate. Yes, it's the same as the celebration that they do in Louisiana... a last ditch celebration of our glutenous, sinful lives before getting our acts together for lent. It ends on Fat Tuesday (ie, Marti Gras... this finally makes sense to me! In Italian, Tuesday is Martedi' and fat is grasso. English really confuses things.), which is immediately followed by Ash Wednesday. Very Catholic.

Although scattered festivities have been going on since over a week ago, the big kick off was on Thursday, dubbed "Fat Thursday." 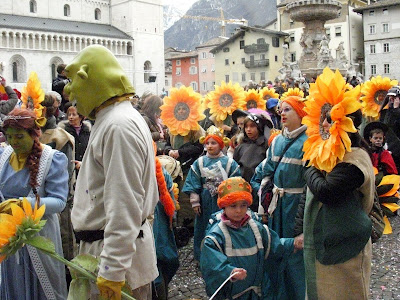 On Thursday, Punkette went to school in costume and had loads of fun. Some of the parents put on a play for the kids, I'm not sure what it was about. I stopped asking about what they tell her at school after she told me all about blue and green little ridding hoods... as in Little Red Ridding Hood and friends. It's just too much for my pea sized brain to take in. 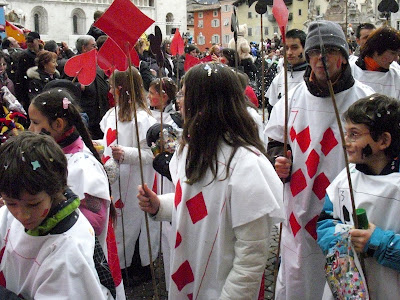 Punkone didn't dress up for school because his class did not. I'm not exactly sure why (I must appear to be a very involved parent to you) but perhaps it was for the best as the kids are asked to change into their costumes at school. If I think about the problems that changing into gym shoes seems to create, I guess I do have a fairly clear idea as to why costumes were done without this year. 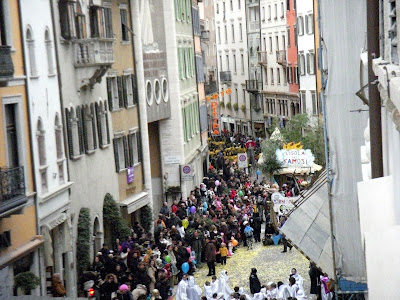 On Saturday, in our little city, there is the parade that you see in these pictures. The parade involves a shocking amount of confetti. They shoot it out in cannons, every man, woman, and child has a large bag of it and it is everywhere. Last year it was raining during the parade and we all looked like we'd been tarred and feathered. This illuminates why, even in September, I spot bits of confetti on the streets. Today, a full day after the parade, after shaking out coats, hair, shoes, and clothes, I went swimming. When I was rinsing out my suit afterwards, I found confetti inside my suit.
at Sunday, February 22, 2009