I'd gotten pretty good at the making friends gig. Between moving from one side of the US to another, I was always reading faces, always trying to gauge a person's willingness to welcome a new friend into their lives. Sometimes it's easy. Like when starting grad school. Everyone is in the same boat and most people are open to making new friends in that situation. Moving to a new town, slightly harder, but I started having kids about that time, so that became the new ice breaker.

When we moved here, I thought, ok... I'm in Italy, so I'm going to push myself to be with Italians. What is the point of moving abroad if I'm going to socialize in an English speaking bubble?

But my mission to make Italian friends has been tough. My main mode of contact is parents of kids that the Punks go to school with. While this worked fabulously in the states, not so much here. The adults are just in their own groove and don't see much of a reason to change it up with a new American friend. 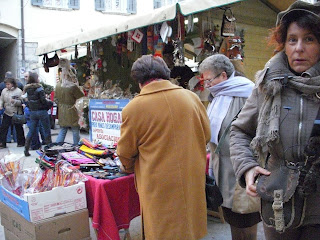 just a scene from the street

And I've noticed that, although I had the objective of making friends with the locals, most of my friends ended up being people that have traveled/lived abroad or have also moved here from somewhere else. Even if they are Italian, generally they grew up in another region and also feel somewhat out of their element here. And most of them speak English, while the average person in this part of Italy does not. 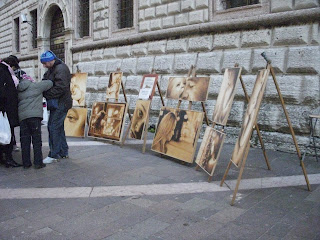 And I wonder why that is. Even with the desire to integrate, I've found myself surrounded by a group of internationalists. Like myself. Not that that's bad, I just find it curious. I can strike up a conversation with someone who's lived here their whole life (at Punkette's school 90% of the parents of the kids were born here) and it seems to peeter out quickly. Never getting beyond the weather or school activities. But yesterday, I started to talking to the woman that works at a gelateria close by (they've reopened for Carnivale!) and we chatted for over 20 minutes. I learned she is from Colombia, she has an older daughter that wants to return as soon as she is finished with high school and a son who just turned three. I learned she's lived here for 12 years and is married to an Italian. And we just had a comfortable time chatting with each other. I think I may go invite her to our next dinner party.

I guess it's not surprising that you end up hanging out with people who have common interests or experiences... I am just surprised how strong that push is. Becoming one with a new culture must be nearly impossible, because we're always in the bubble of our own experience.
at Wednesday, February 18, 2009