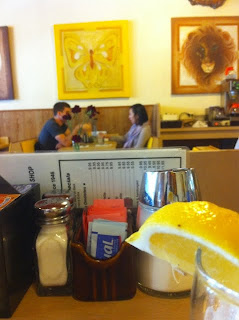 In the wake of an amazing vacation or the incredible experience of being abroad for a few years, what do you get excited about when you get back home? I keep finding myself focusing on comfort, and I went back to a little place today that could be the physical expression of the feeling.

It's a little diner named "Ann's Coffee Shop" and doesn't seem to have been touched by the silicon valley it sits in. They have cottage cheese and peaches on the menu and a navy bean soup of the day. My neighbor orders a glass of 2% milk and a liverwurst sandwich on toasted bread with lettuce, mayo and mustard... He's obviously come home. The decor and the majority of the clients all had their heydays sometime in the sixties, but that too has a comforting effect on me. I found it grounding to be in a place that was perfectly content being just as it is... and always has been.
at Thursday, October 21, 2010 3 comments:

cute as a button

Our Peet's Coffee opens at 5 am. I am floored by this fact. It's one bit of insanity that I move back after 3 years of Italian soaked paradise and set myself to commuting across the bay at 5 am... quite another to discover that there is a stirring of activity at this hour. Human activity.

I'm humbled by the guy who shows up on his bike and stands there sipping coffee from his travel mug. Eyeing me hello while I sleepily fumble with my bag ticket coffee and try to punch my ticket without spilling the whole lot. He's managed to not only get himself to the train platform on time, but to do it well. He is clearly in control of his life.

This morning I am cheered though. I got out the door those 10 crucial minutes earlier that draw the line between feeling frantic and cool peace. Time to not feel compelled to speed through the streets. To return the smile from the girl working at the coffee shop. She, btw, is quite simply cute as a button and complements me in a different way every time I see her. Small things. Today she said my wallet was cute... She liked the birds on it.

I think we're all doing ok with 5 am. Like camping or tornadoes, it seems to bring out the best in us.

Well, that's about as deep as it's going to get because this post is just about me and my superfacial obsession with how my office looks and feels.

Yea, I have an office now.  Isn't that weird?

I have quite a nice view from my window too.  Some trees, lovely quartet of towering orange exhaust stacks, blue California sky.  I'm not complaining about that.

It's just that when I have my desk facing the window, I feel like every Tom Dick and Jane who walks buy noses in on what I'm up to.  It's unnerving.  I'm constantly on the ready to hide open message windows.

I was so ill at ease that yesterday I turned the desk around so that it now faces the door.  Problem now is that instead of gazing off at the blue sky, I look out into the hallway.

Tom Dick and Jane have noticed too (I told you they were nosing)... and to my surprise, seem to feel compelled to do something of a performance for me as they pass by.  One guy just did this little side shuffle so that he could square his shoulders to the door and accompanied it with a smiling mumble.  Very odd.  Especially as I haven't gotten so much as a nod from this dude in the numerous hallway passings we've had.  Seriously, he doesn't answer when I say good morning.

Where's that second cup of coffee?