Punkette has had a fever for five days now. My general rule is let it ride for three days and then after that have a doctor check things out. So, I hauled the punks off to our publicly assigned doctor yesterday, around 6 pm (they're only open 4:30-7 pm)...

We walk into the building and it's dark. This is unnerving, but not unusual. I just wish people would make a practice of leaving the hall lights on during business hours. But like I said, I'm somewhat used to this... we just turn on the lights and head up to the second floor.

We arrive at what I think might be the doctors office, only because the door is open and there are moms and a couple of kids sitting inside. It's also dark at the entrance and one panel of lights is turned on over the cluster of people waiting on mismatched chairs from a number of the past 5 decades. The space is defined on one side by a wall of wood paneling. The waiting room is an area carved out of what clearly used to be two rooms. The walls are bare and yellowed and there are a couple of notices taped on the wood paneling. No friendly receptionist... not even a grouchy receptionist. No posters or pamphlets about healthy children. No germ laden children's books, no fish tank... 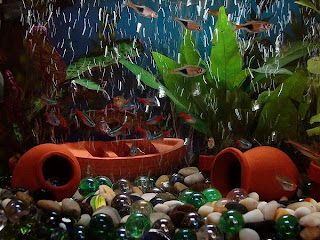 a fish tank would have been nice
I gulp my nerves back down and say something like "I guess this is the right place" in as cheery a voice as I can pull off. The kids are not buying it.

Punkone:
Mom, this place is weird.
What kind of doctor is this?
Mom, I'm freaking out.
Man, I'm sure glad I'm not going to see this doctor. If I was the one seeing this doctor I would be freaking out.

I inform him that this is his doctor too and that he should just calm down and get comfortable. He continues to elaborate on everything about the place that gives him the creeps. Problem is, I totally agree with him. I tell him to zip it.

And I'm thinking... So, this is public health care. Well, the doctor must be good. How bad could he be? From the looks of his lobby he doesn't seem to care much about his patients being comfortable. Doesn't he care at all about easing the irrational fears in little minds? Think of the children! And now I'm starting to feel sick.

But we stay. I'm waiting to see this doctor. The truth is, he'd have to be Dr. Ross to pull this gig off. We're watching another woman in the room entertain a coughing, crying child and fidgeting in our seats trying to ignore the strange sounds emanating from behind the wood paneling, but straining to hear anything reassuring. Finally, the patients change. One out, next in. And we catch a glimpse of the doc down another dark hallway. He seems ok. Was that the doctor? Looks like some guy that just walked up from the bar. No crisp white coat or scrubs, no stethoscope... he doesn't look at all the way doctors should look. 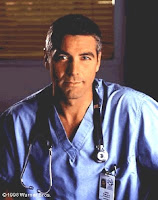 We stay. Still another family ahead of us. I look at punkette. She doesn't seem that sick. I bet just another couple of days of rest and she'll be fine. What difference could seeing this doctor possibly make? But maybe this is just culture shock. Yes. I just need to ignore the intuitive red flags flying around (and the two punks) that are pleading with me to just leave.

Finally, I fold, and I call hubby. I describe the place. "Is this normal?" Granted, now I've just completely blow my cover with the kids. Well, it just doesn't feel right. All hands up if you think we should blow this pop stand! The "aye"s have it!
at Tuesday, November 18, 2008