I live in the Palazzo Parisi. It was built in the 1700s. Now it's just an apartment building, with shops on the first floor and apartments in the three floors above, but it's probably one of the few palazzi from that period that still shows it's original design. Through a combination of desire, neglect, and historical preservation, much of the interior of the building has survived the centuries. Typically buildings of this age have been gutted and remodeled by now, usually two or three times over.

You enter the building through a pair of huge doors. The floor is still made of rough small stones, with two strips of large flat stones for wheels to roll smoothly. The ceiling is high and arched and the inner drive brings you to a grad open staircase leading up into the building. The staircase is wide with an iron railing at the beginning. The first floor (above the ground floor) held the parlor, dining, and ballrooms. The second floor used to be the family bedrooms and studies, of which I can guess there must have been 8 or 9 very large rooms. This is followed by the third floor servants quarters. You can follow the progression by the narrowing staircase and the railing that becomes a simple wooden one as you start up to the servants quarters. All this has been untouched and unfortunately is in obvious decay. The wood railing especially is obviously fragile with dry rot and one of the first reasons I didn't want to rent one of the upper apartments. 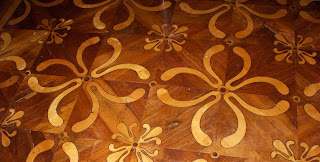 Marchesa is the woman of the house you might say. Palazzo Parisi. It has been in her family since the beginning. Her great, great (ok, I don't know how many greats) grandfather built it in the 1700s. And her family has always lived here, generation after generation.

Now Marchesa is in her late 80s. Like many of the people I've spoken with her age, she speaks English fluently. She has long wispy white hair and a sharp wit. She is harsh with most people but she always greets us warmly and smiles at the children and doesn't complain about the noise they make. In this sense, she is a good landlady. I'm glad to be on her good side and make efforts to stay there.

I'm calling this woman Marchesa because that's what she calls herself. Even her companion calls her Marchesa. It's a title of nobility, above a countess and below a duchess. I had to look that up. But she must have obtained it when such things as titles were granted in Italy... I have no idea about the circumstances, but she certainly carries herself and her affairs as I imagine a Marchesa would. With formality, precision, and pride.

Marchesa has a male companion. She made a point to tell us that they sleep in different rooms when we first met her. So, rest assured, there is no funny business going on there. For me, however, the funny thing is that she calls him "Ingegnere". Because he is an engineer. I call him by his name, Franz, but I dare not call Marchesa anything but Marchesa. Franz is a likable creature. He is straight, thin, also with wild white wispy hair. He has a firm handshake. He speaks quietly. And mostly takes orders from Marchesa. Orders that generally lead with "You idiot!". When we first moved in, one of the shower doors was missing. When we brought it to her attention she turned to him and hollered "You idiot Ingegnere! I told you to make sure the apartment was ready!" and then lathered us with apologies. I sometimes wonder what he's thinking when I see him out for a walk alone. Is he meditating? Serenity now, serenity now... or maybe he's just enjoying the fresh air. 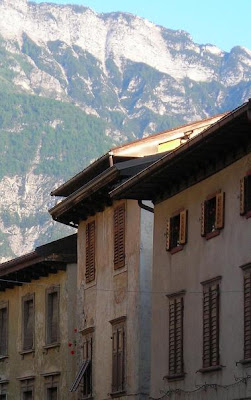 Maybe it's just me, but I can't get over how they quite casually use these titles as names for each other... "Marchesa, can I get you some tea?" or "Ingegnere! You idiot! You left the socks hanging in the rain!"

Ok... one more thing and then I'll leave Marchesa and Ingegnere alone. The thing is that they have a car and I have yet to figure out how they manage to drive it. You see, Ingegnere can hardly see and Marchesa can hardly walk. And in both cases I do mean hardly in the strongest sense. She usually in a wheel chair and I know he can only see shapes and shadows just three feet from his face. So how do they drive this car? My hope is that her legs are stronger than they seem and she can manage the pedals. The only other alternative I can come up with is that Ingegnere controls the car under Marchesa's direction. I guess it would be much the same way they do everything else, although behind the wheel of a vehicle it becomes slightly more terrifying.

I wonder, if when, I'm an old character like Marchesa (do I dare imagine I could be anything like Marchesa) if I will be lucky enough to be with someone like Ingegnere. I don't mean someone I can chew-out mercilessly. I mean someone who makes up for what I'm not. Someone who fills that empty space in the world that I'm incapable of reaching... who brings it to me and I to him.
at Tuesday, November 04, 2008