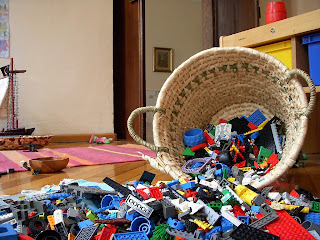 Three years ago, some friends of mine were getting rid of a garbage bag full of spare Lego parts. All those funky pieces that come in Lego kits designed to build just that specific thing. Their son had outgrown the Lego stage (will there come a day?) and their daughter, like mine, prefers the bricks. We had a small collection of bricks that my kids couldn't get enough of and although the memories of my Lego building days reminded me that this was indeed a bag of useless spare parts, I couldn't say no when they offered it to us. 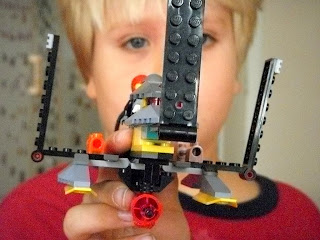 That was three years ago. Punkone (pounced punk-oh-nay) was 5. And every day for two months he played with those Legos. He did nothing else but invent small ships, cars, planes, rockets... from that pile of parts. I was amazed. And thrilled. And I know it was literally every day for two months because everyday I was surprised to see him engrossed in the pile of parts. He even invented little ships for his baby sis to play with (since there is no better place in the world than the side of your big brother). 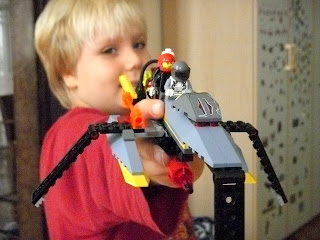 Today, like most Saturday mornings, he's there with his Legos. We've even added a few kits of our own over the past three years. But the perfection of the vehicles quickly morph into something squirley... invented from that sweet little brain and that pile of spare parts.
at Saturday, November 08, 2008