Did you know that the floors in my home were put down in the mid 1700s? They're made of wood. They don't make a sound when you walk on them. Not a creak. A few of the rooms have newer ones that practically squeal when you touch them, but these old ones in the library and my bedroom might as well be bedrock. Amazing. And beautiful.

Considering that this palace was in Austria back then, they were probably afraid of Napoleon. Perhaps their greatest fear was that their palace would some day be inhabited by a bunch of foreigners. 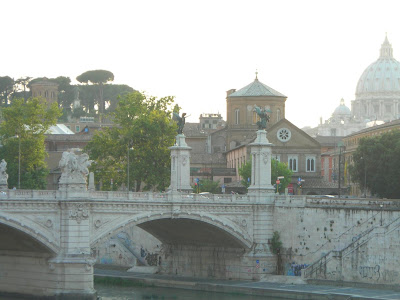 This is the picture that I put in my background. It's in Rome. I thought I would post it in case not seeing the whole thing was driving anyone crazy. It's bad enough that I'm making the local nobility roll over in their graves.
at Friday, November 13, 2009