The bus wasn't particularly crowded, but enough that she would have had to push her way through to validate her ticket. Instead, she stood in her space at the rear, bracing herself for the curves against the door. She stood there, fingering and thumb flicking the edges of the red and yellow ticket. Sensing the people around her but not hearing conversations. Catching a few pairs of eyes near the front, snagged momentarily in her gaze. But feeling that space, that there was nothing more for her to do in the next few minutes but to watch for the door, she settled down into the steam of thoughts. That stream that's always there as if she'd been wading just now at the bus stop. Looking for the bus and pulling out one ticket, the stream swirling around her ankles. Now she took the space to flop down in it. 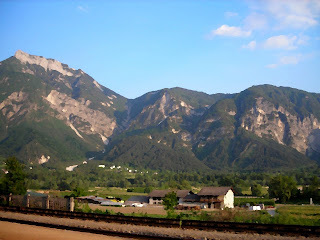 The swimming reflection of blue eyes that match the sky, right where it meets the mountain. Or at least her memory of the blue. Gazing past the same scenes she passes every day, the tones of a voice gently swirl up around her. She smiles. Feeling that smile, that outward reality, she sees the things around her... the rows of grass between bare vines now speckled with yellow dandelions... there's always something to give reason for a smile... but she knows that it's the resonance that brings it.
at Saturday, April 18, 2009