The punks and I had a really wonderful walk home from the dentist today. The temperature has dropped dramatically in the past two days. So cold, my nose hairs are freezing up and Punkette retrieved a stick from under a pile of leaves that had patches of frost on it. She was delighted to discover how cold it felt. What a goofball, that one.

Our walk from the dentist takes us first along the river. The Alto-Aldige. I think you can see blurry bits of it on the side of my background image. Yea! Did you know that was an actual map of my surroundings? Pretty cool. Anyway, the Alto-Aldige is a big rough looking river. The kooks around here have raft races down the river in the early summer, right when I'm sure it must be at it's most dangerous levels. Now it's at least 5 feet lower, and still has some pretty nasty looking currents.

But it's a wonderful walk. Lots of trees and the sun coming down into the valley. It's our last half-day off together before Christmas break so we decided to go somewhere special for lunch. Chinese. Just over on the home side of the river.

Lunch was uneventful other than that we ordered from their Sushi menu and it was DEEE-LICIOUS and I adore the family that owns the restaurant. They always take the time to chat with us about how we're adjusting to life here. One of the women even taught the kids how to fold the napkins into sailboats.

From the restaurant our walk wanders through downtown toward where we live on the other side. People are returning to work and shops are opening up after the pausa. We're window shopping for gift ideas. This included a drool session over where they have the 480 euro Lego Death star. I swear it was only 450 last time we saw it.

So the kids are dreaming up fantasy Christmas gifts... Punkone comes up with a list that would knock St. Nick back about a thousand bucks. But Punkette knocked it out of the park.

Her idea was inspired by the sight of someone tossing their cigarette into the drain. She goes into her rant... Why do they throw their cigarettes into the drain? That's for water! It's not a garbage! That's why the ocean is full of all that gross garbage! (gee... I wonder where she picked that up?)

And then the idea unfolds: I want Santa to bring me a secret zapper for Christmas. One that I can hide from everyone in my hands. Then when I see someone who throws their cigarettes into the drain I'll use it to zap their brains. I'll zap them just a little bit so that they start throwing their cigarettes into the garbage. I'll change their brains so they won't want to throw their garbage where the water goes anymore. They can still smoke cigarettes if they want. I won't zap them too much.

Now I have to admit that I'm always encouraging my kids to utilize their imaginations to solve problems. To think up crazy impossible things because someday it might be possible to invent such a thing. But, somehow I don't think mild brain alteration of litterbugs will come to pass.

Dedicated to Think Green Thursday, and to goofballs. 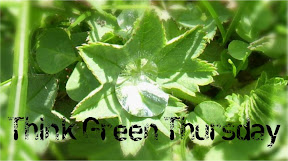