Look at them apples!

Reposted on Monday with way better photos...
Apples are one of the primary crops produced in the region of Italy in which I live, Trentino-Alto Adige. Today I had the opportunity to go to a family farm which focus on heirloom varieties. The certified organic (agricoltura biologica) farm is located in Zivignago di Pergine.

We were welcomed into the celar and had the joy of learning about the tastes and storage times of a number of different varieties of heirloom apples. For instance, the Renetta Ananas is a tangy and a crisp, very densely flavored little apple. The perfect size for a school snack and should be eaten in the next few weeks. Or the Bella Di Bosco. It has a more sour taste, that sweetens with time and can keep through Christmas. 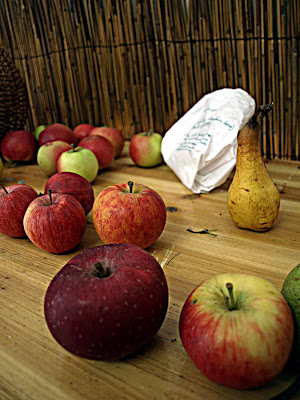 I was particularly amazed by the Topas (shown above). It was so crunchy and juicy, slightly sour but also sweet and will stay this way through MAY. May! Can you believe it? We bought 8 kilos of this one.

There were other varieties that had not yet been picked. I was throughly impressed by the passion of this family for what they do. Apparently the mass production of apples in the area has been reduced to TWO varieties. Down from hundereds documented in 1934. The diversity of shapes, sizes, and tastes has been lost.

The Sustainable Table has this (and much more) to say about the biodiversity of our crops:
Industrial farms currently mass-produce only a few genetic varieties of each crop used for food. These commercial crop varieties are specially bred for uniform appearance, disease-resistance, and for their ability to endure lengthy transport. Unfortunately, when farmers abandon traditional varieties to begin planting mass-produced commercial varieties, the traditional varieties can quickly become extinct.

When non-commercial plant varieties become extinct, we not only lose the distinctive flavors and appearances of these fruits, vegetables and grains, we also lose the genetic diversity that they otherwise contribute to the plant stock. According to the Food and Agriculture Organization of the United Nations, since 1900, approximately 75% of the world’s genetic diversity of agricultural crops has been eliminated. xiii 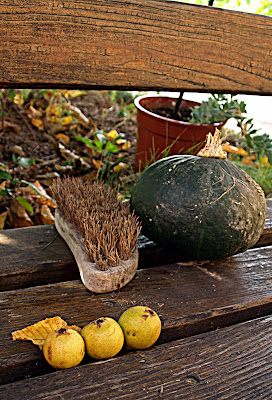 What can you do to improve the biodiversity of our food? Basically start looking outside the supermarket for your food. Get in touch and support local growers. And try your own hand at growing some less common varieties of fruits and vegetables.

Head over to Think Green Thrusday for more green ideas.
at Monday, September 28, 2009